Whoever decides to start playing electric guitar, they automatically become hooked an all the gear, pedals, and other effects. While some may prefer multi-effects processors or modeling amps, building pedalboards has become a science on its own. The effect pedals are one of the essential expressive tools, giving guitar players new ways of creating different tones. And we all know that the tone and expressive qualities are the most significant things we love about electric guitars.

Boss’ VE-8 pedal is intended for both the vocals and the guitar. It offers some basic effects in a fairly compact unit. In addition, it also comes with a looper capable of recording 80 seconds. The basic effects include reverb, distortion, as well as “smart” harmonization. This means that it can add vocal harmonies according to the chords that you’re playing, all in real-time. There are also other effects, like the notch filter that reduces feedback. There’s also a chromatic pitch correction, which can handle some of the minor errors in your singing, kind of similar to Auto-Tune. To add to all this, there’s also an acoustic resonance effect that can smoothen out the tone of acoustic guitar piezo pickups. 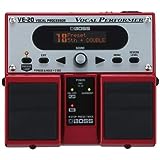 Another one by Boss, VE-20 comes from the same series but is a bit different. It’s intended for vocals only and features a fairly simple interface. Nonetheless, it still can add harmonies, even 3 additional voices in a given scale. It comes with 30 factory presets, plus an additional 50 user-generated ones. Aside from a harmonizer, it includes reverb, delay, compressor, de-esser, and pitch correction. What’s also great about it is the build quality, which is not unusual to see with any of the Boss products. It’s pretty simple to use and also features a looper with 38 seconds of recording time. 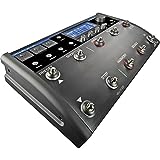 TC Helicon specializes in voice processing pedals, and their VoiceLive play is a fairly advanced unit for professional or semi-professional vocalists. It comes as a great option both for band settings and solo performances. There’s is a solid list of effects on it, including harmony, reverb, delay, doubling, and many others. But what makes VoiceLive Play so exciting is the fact that it has more than 200 presets that you can hear in some famous songs. This means that you can have some of these same exact sounds from famous songs right out of the box.

In TC Helicon’s arsenal, we can also find some simpler and more compact pedals. Such is the example with their critically acclaimed Harmony Singer 2. This one is the size of a regular guitar pedal and it provides you with both harmonizer and reverb effects. Aside from the microphone input and output, you can also connect a guitar to it. This way, you control all the harmony presets according to what you’re playing on your guitar. There is a total of 8 presets for the harmonizer effect.

VE-2 is another one from the aforementioned Boss’ series of vocal processing pedals. However, this one features a more mored approach and design. There’s only one main switch that does all the work, according to the set parameters. It comes with reverb and delay effects, but its main purpose is to be a harmonizer. There’s an option to select any key and then add harmonies according to it. Of course, it also works with guitars, allowing “smart” harmonization according to the chords that you’re playing.

But among the many different pedals, we guitar players usually tend to get attached to some of the wackiest and most “colorful” effects. By colorful, we mean something like those large chorus pedals, analog delays, different wah-wahs, or even some devices that can help us create those unique sounds.

We get so obsessed with them that we even forget about basic concepts, like making our guitar tone pleasurable for the audiences. As a result, we tend to completely overlook some of those very useful pedals, which is just the case with volume pedals. Although we can argue that they’re pretty uninteresting (even outright dull), they’re a crucial component for every setup. Here, we will explore how they work and why they are such an important tool guitar and bass players.

How Does a Volume Pedal Work?

Put simply; volume pedals are like volume pots turned into pedals. The only difference is that you control the output volume using the rocking part of the pedal. But contrary to a wah pedal, you just set the volume at the desired level and keep it there. You don’t need to rock it all the time unless there’s some specific effect that you’re aiming at

Volume pedals are pretty straightforward with their construction. There’s the wah-like construction, input, output, and an additional knob that sets the minimum volume level. Many volume pedals also have an additional tuner output and even one or more separate expression jacks for connecting with other effects pedals and controlling some of their parameters. (We’ll get to that later.)

But as we said, volume pedals operate similarly to any volume pots. There’s a simple mechanism inside that’s attached to the pedal’s rocking part. As you move it, the potentiometer inside is turned up or down. When the pedal is at its “closed” position (pressed down), the volume is at its maximum. When you put it all the way back, or the “open” position, the volume is at its minimum.

It’s imperative to note that the volume pedal is not a booster. It’s not there to add any boost to your signal but to turn it down from its original level.

A video explains it better than a thousand words so have a look below for a quick and simple demonstration. https://www.youtube.com/embed/puKU45egs0Y

But Why Would I Need a Volume Pedal in the First Place?

You might be wondering: “Do I really need a volume pedal? Could I not use the volume knob on my guitar instead?” Well, things are really not that simple. While it might not be the most attractive and exciting thing on your pedalboard, one volume pedal is enough to make a world of difference.

While everyone’s signal chain is their own business, some people prefer just using a Compressor pedal instead, or a Synth pedal. It all depends on what you’re trying to achieve. But a volume pedal finds use in almost any band setting, especially if we’re talking about larger bands or orchestras. Nearly all of the genres have a lot of dynamics involved, meaning each of the instruments will need to accommodate according to the song.

Another important distinction is the difference in effects that your guitar’s volume pots and your volume pedal create. When turning down the volume on your guitar, you’re reducing the signal strength coming from pickups. This way, you’re “feeding” less signal into your distortion and other pedals. As a result, it’s not just your overall output volume that’s reduced, but you also get less gain. In some way, a similar effect is achieved when you reduce the gain level on a distortion pedal, ultimately changing your tone.

Meanwhile, using a volume pedal does the opposite thing. The tone remains the same, but the overall output volume in the mix is reduced. This way, you can adjust your level in the mix without changing anything else. This is why volume pedals are especially useful for bass guitarists. In some songs, they need to keep the same tone color while also reducing the volume level. After all, being a backing instrument, there’ll be a lot of dynamics play involved in the process.

Are There Different Types of Volume Pedals?

In case you put the low impedance earlier in the signal chain, your tone might get “dull” or “soaked up” and feel weaker. You’ll end up losing some of its most essential characteristics, including sustain. This can sometimes be corrected if you place any buffered bypass pedal in your signal path, like a standard tuner.

Now that we know that low impedance volume pedals are more common, there’s another important thing to know about their placement. There are two ways that you can place them in your signal chain. The first way is to have it before the echo and reverb effects, which are usually at the very end of the signal chain. With this formation, you will be able to reduce the volume. Still, the delay or reverb repeats will continue according to the set parameters even when you completely shut off the volume by putting it to the “open” position.

Another way is to have the volume pedal at the end of your signal chain, after delay and reverb. This way, even the repeated tones will be affected – all the repeats will cease the moment you shut off the volume.

What You Also Need to Know

We recommend picking up a cheaper guitar pedal if you’re just starting out. Volume pedals often include expression pedal functionality and any cheaper model will do well in that regard. Some pedals out there – like some envelope filters, choruses, vibratos, or automatic “wahs” – can be paired with an expression pedal. This way, you’ll be able to control some of their parameters. However, you won’t be able to use your volume pedal both for volume and expression control at the same time. You do just one thing at a time.

If you’re serious about playing the guitar, it’s vital to choose a quality-built volume pedal. If the rocking part can’t stand still in one position, then there’s really no point in having a volume pedal. Ernie Ball has some great stuff, like their MVP. Boss also has excellent volume pedals, like their sturdy-built FV-500L. Other examples also include Yamaha’s FC7, DOD Mini-Volume, and Dunlop DVP4.

GuitarSumo.com is a participant in the Amazon Services LLC Associates Program, an affiliate advertising program designed to provide a means for sites to earn advertising fees by advertising and linking to amazon.com. Amazon and the Amazon logo are trademarks of Amazon.com, Inc. or its affiliates.